When Audemars Piguet released their new watch collection, the Code 11.59, it was labeled a controversial launch. This was due to the fact that this was the first time in recent decades that Audemars Piguet had made something completely new and non-sports oriented. Now that things have calmed down, the combination of industrial sci-fi in the case design and modern elegance on the dial has become a fascinating platform for experimentation. This is perfectly shown by the three new Audemars Piguet Code 11.59 models, which the Swiss luxury watch manufacturer just launched recently.

So let us discuss the three new additions to the Code 11.59 line of watches, shall we?

Being futuristic and yet classic is something that is pretty uneven and can not be matched. But the blending of something old and new can be a winning combination if done in a correct manner. This first new addition to the Code 11.59 looks simple, but it deceives you. One could simply mistake it for a simple steel dress watch with a black dial at a glance. But those who know horology and are watch enthusiasts will appreciate and understand the depth behind its appearance.

The case is crafted from brushed and polished white gold. To thin out the overall impression of the watch and make the case almost look skeletonized, it has black ceramic sides.

Now let us look at its dial which is made from polished onyx, which gives a deep and rich shine reflecting off the black dial. Adding more luxury are the pink gold baton hands and inner-bezel numerals, which match the tone of the flying tourbillon's balance wheel.

Powering up this pretty watch is the Calibre 2950, which one can see from the display caseback too and admire its fantastic finishing. It has a power reserve of 65 hours. 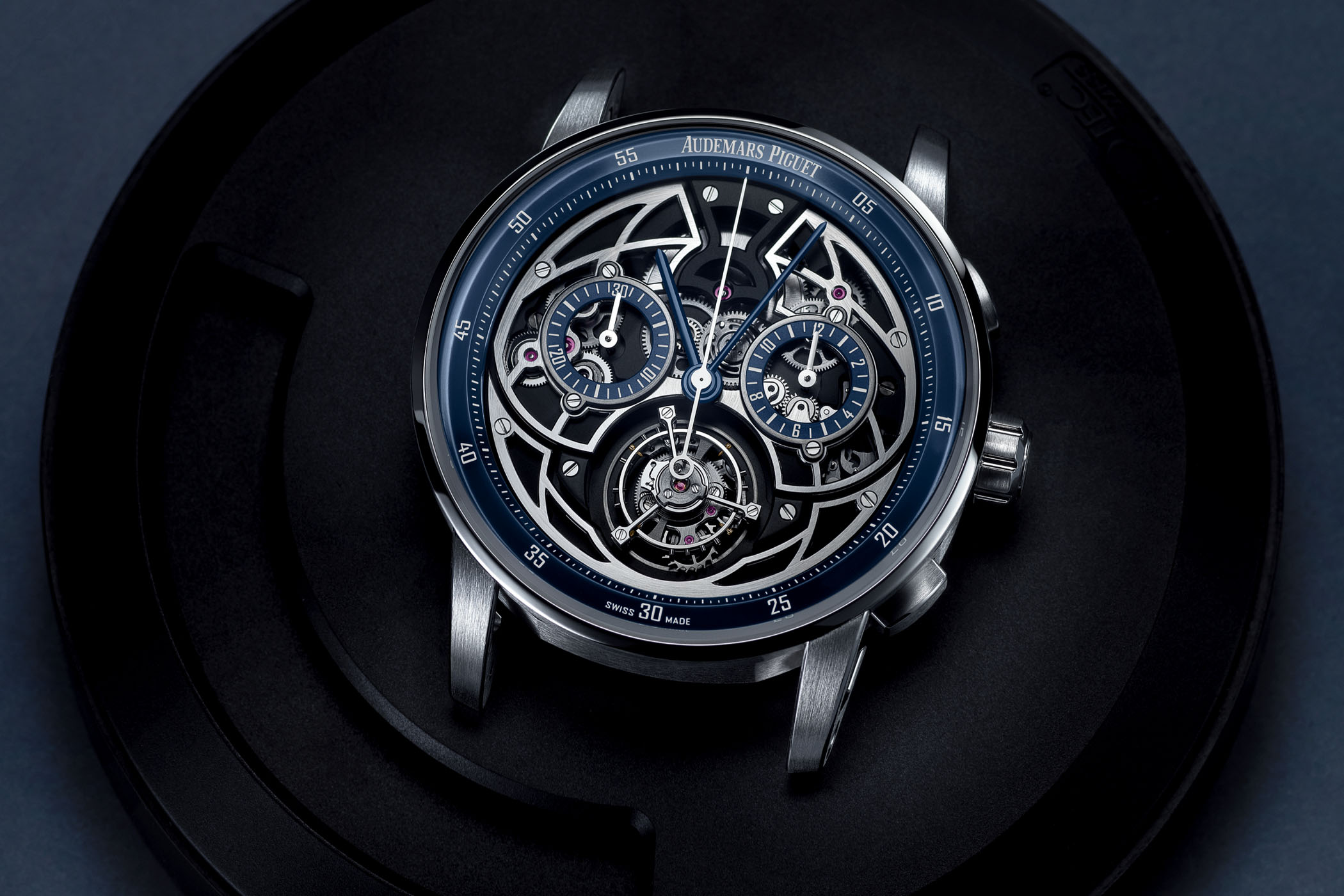 While the Code 11.59 is far from anything like a Royal Oak, this particular model from the collection captures a piece of the Royal Oak with the charm of that white metal and blue dial. Replacing the steel is white gold, and the octagonal element in the mid case is made from blue ceramic. Powering up this beauty is the gorgeous Audemars Piguet Calibre 2948, which is a luxurious, hand-finished, skeletonized movement that features a tourbillon. Colored blue are the manipulate and bridges thanks to the Atomic Layer Deposition process. Matching this is a floating inner bezel thanks to a CVD coating.

Each of the three new Code 11.59 models has a diameter of 41 mm and a lug-to-lug length of 50 mm, which appears bold enough on the wrist while not being too large that it feels uncomfortable. This watch is also the thinnest of the three new models, measuring only 10.6 mm. The movement of this model also has a longer power reserve than the previous model at 72 hours, running at 3 Hz. 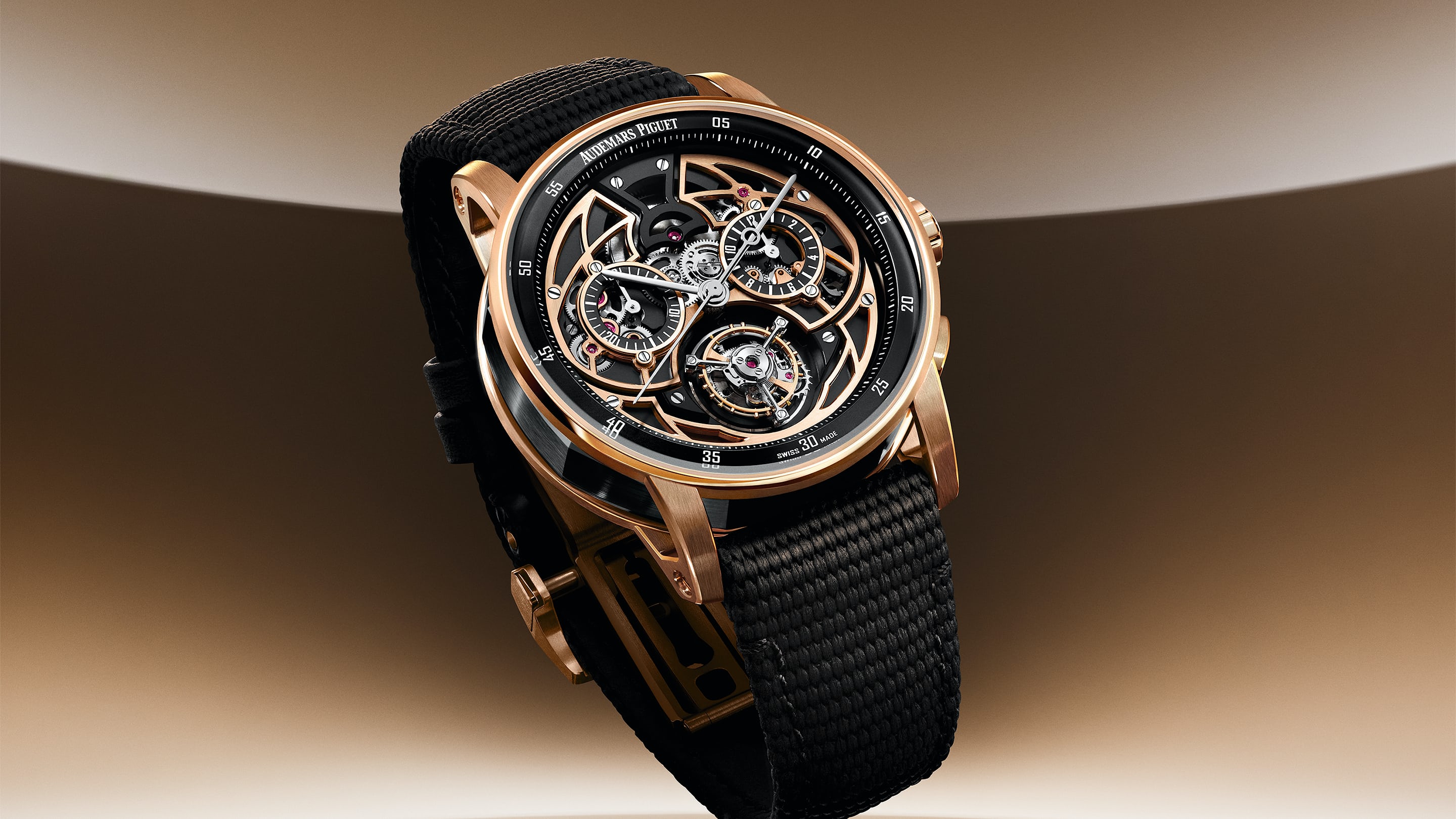 The third and last of the new Code 11.59 models is luxurious in an incomparable way to the other openworked version. It features an 18k pink gold and black color scheme, which accompanies the skeletonization well. The dial features gold plates laid out in elaborately decorated wing-like shapes. This gives a beautiful structure to frame the two chronograph subdials.

In the center is the tourbillon, which completes a three-register look. There are silvery hands that allow easy readability through all the complexity.

Powering up this watch is the Calibre 2952, which is no ordinary movement, do Audemars Piguet even make such a thing? It features a flying tourbillon and a flyback chronograph complication, and viewing this movement through the sapphire display caseback will leave you in awe. The color scheme of black and gold remains with an organized chaos of components working together continuously. It has a power reserve of 65 hours at 3 Hz. At 13.8 mm, it is the thickest of the three watches, but it is still quite slim for this much technology.

When Audemars Piguet launched the Code 11.59 back at SIHH 2019, the release of the original six models was controversial. But since then, the collection has gone in offbeat and colorful directions. The Three watches we discussed today are interesting enough conceptually and aesthetically to stand on their own. We have three separate concepts, an electric blue skeleton, a blacked-out dial, and a complicated two-tone, all pleasing the eye.