The basic purpose of the Royal Oak Concept line of watches was to provide the engineers and designers at Audemars Piguet an opportunity to show their technical abilities and try out unconventional designs while honoring the root of the brands at the same time. This remains true with the launch of the new Royal Oak Concept Flying Tourbillon GMT.

Now then, let us discuss the watch, shall we? 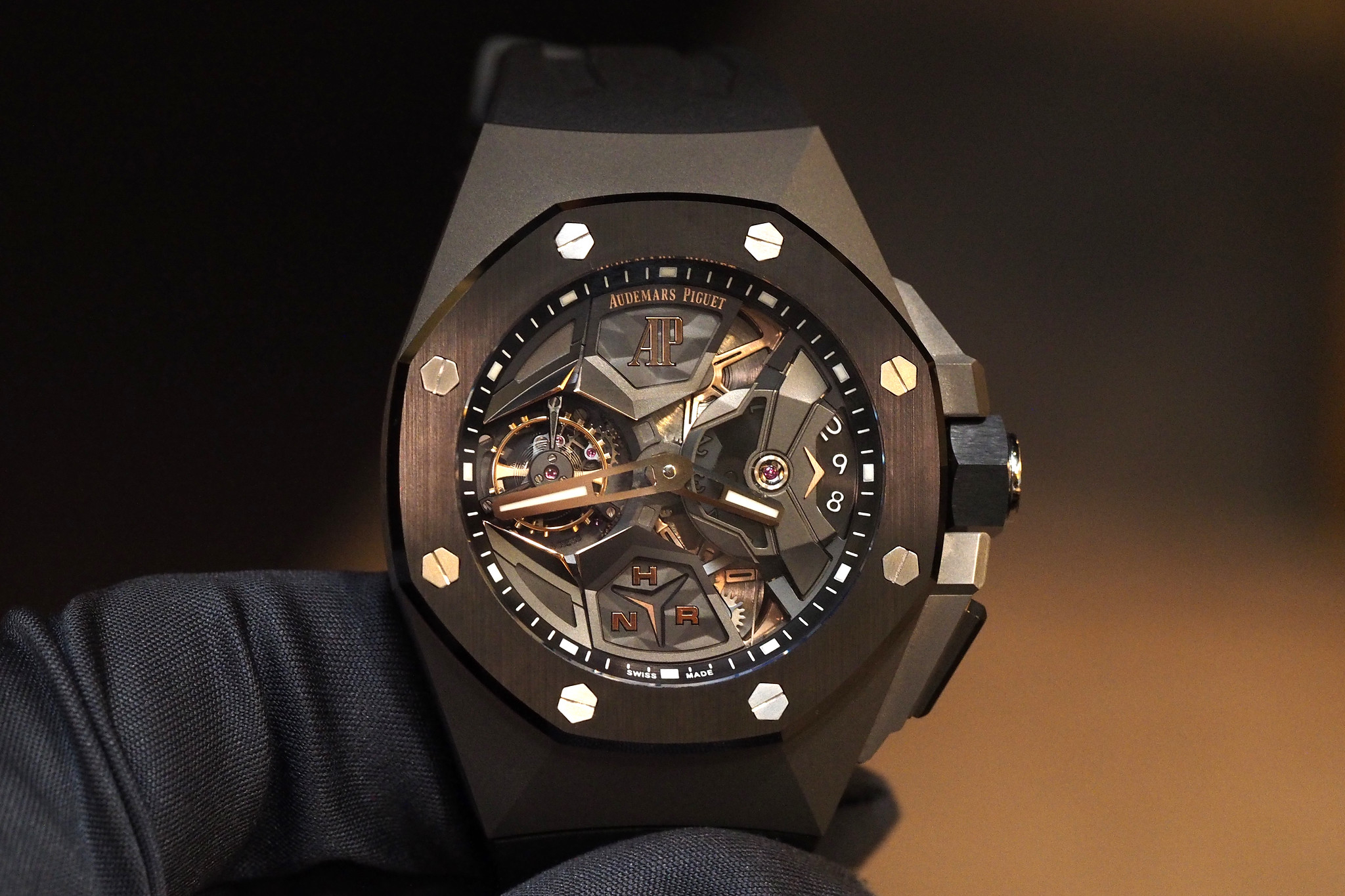 The model overall remains unchanged apart from the materials and colors used.


The open-worked dial of this AP watch features a black flange. The dial further features lumed hour markers. Pink gold is the theme of the dial throughout from the text on the logo and the crown function indicator (H - Setting, R - winding, N - Neutral) that sits at noon and 6 o'clock, respectively, against green fractal patterns to the lumed handset. At 9, the flying tourbillon is on full display. The tourbillon with black PVD and pink gold tone blending together in the floating cage reminds us of the idea of the 'flying' tourbillon because it is mounted underneath, instead of above, to allow for an uninterrupted view and a flying experience. For the GMT display, Audemars Piguet uses a novel display that employs two superimposed discs to show a second 12-hour time- which can be adjusted in one-hour increments with the pusher located at 4- and day/night. Numerals are printed on the sapphire hour disc, which rotates twice every 24 hours, while the brass (day/night) disc sits beneath with white (day) and green (night) finishing and rotates for a single time every 24 hours. This complicated and clever design allows at-a-glance reading for the second time zone. 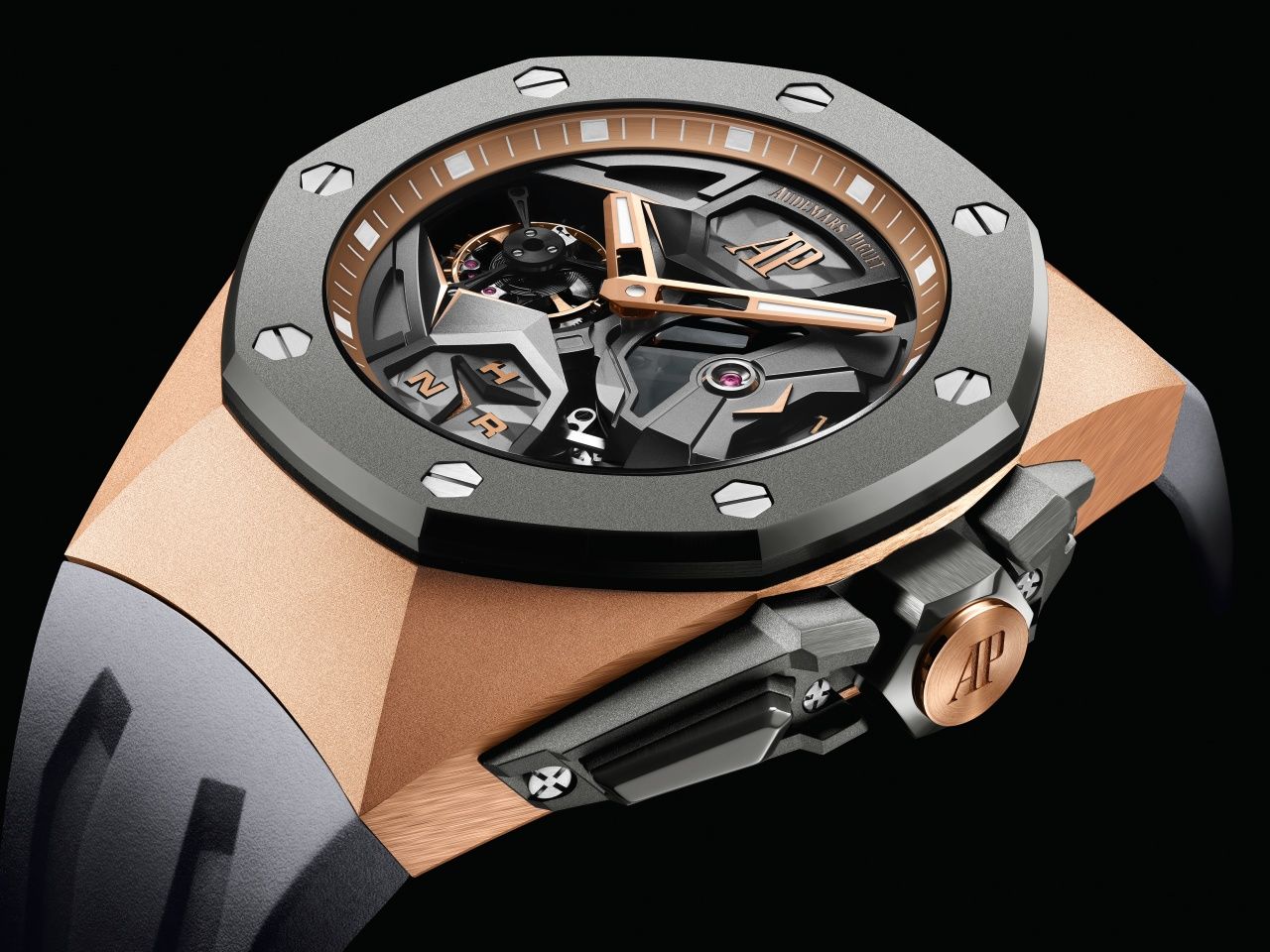 
The case of this concept watch is 44 mm in size and 16.1 mm in thickness. It is an ultra-modern avant-garde interpretation of the legendary and iconic Royal Oak design of Gerald Genta, with big, bold facets and sharp edges. Audemars Piguet has utilized green ceramic for this model, and it looks amazing. The color combination of the deep forest green against the gray of titanium, with a little touch of pink gold on the screw-down crown, with the blend of sandblasting and hand-finished satin brushing and polishing, is stunning. 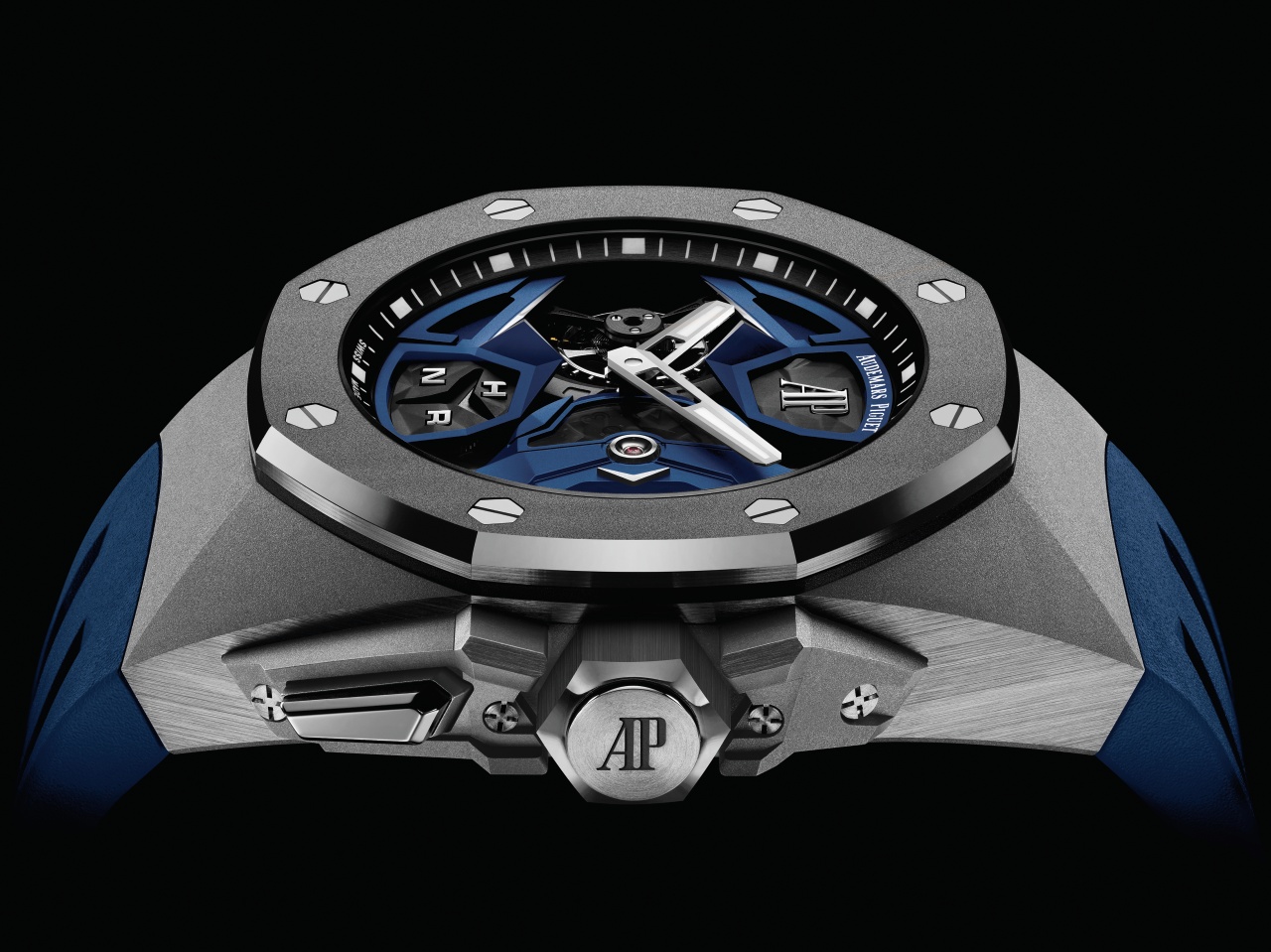 The Audemars Piguet Royal Oak Concept Flying Tourbillon GMT Ref. 26589IO.OO.D056CA.01 features the in-house Audemars Piguet Caliber 2954. This movement is manually wound and has a power reserve of 10 days, which is pretty impressive.


Audemars Piguet decided to go with a textured green rubber strap with sandblasted titanium AP folding clasp for the strap. There is also an additional black rubber strap.

To conclude, it has been one great year for Audemars Piguet fans. The anniversaries are always special, but this one was a brilliant one. We have seen some excellent watches released by Audemars Piguet that combine aesthetics with technical complexity. We hope to see more!